Free Shipping within the U.S

If you're into crafts that require patience, making a DIY glitter tumbler will be right up your alley.  I have to admit I just recently made my first stainless steel tumbler with vinyl and glitter and I learned a thing or two.

Considering that it can be an intimidating project, I thought I'd pass along what I learned making my first glitter tumbler in this beginner tutorial.

Given that i have been in this profession for over 6 years starting with sublimation and currently selling Glitter Cups on both Etsy and my own website
Anyway you definitely need to make sure you have all the supplies - and there are a lot - before you start making a custom glitter tumbler.  Along with at least three days, here's a list of what you'll need for your first tumbler:


How to Spray Paint a Tumbler

Unless you want to use an entire bottle of glitter to fully cover your tumbler, it's a good idea to spray paint it first.  Use a similar color spray paint as the glitter you plan to use.  Spray painting first will allow you to use less glitter and if the glitter doesn't cover well in certain spots, it won't be real noticeable because of the spray paint. 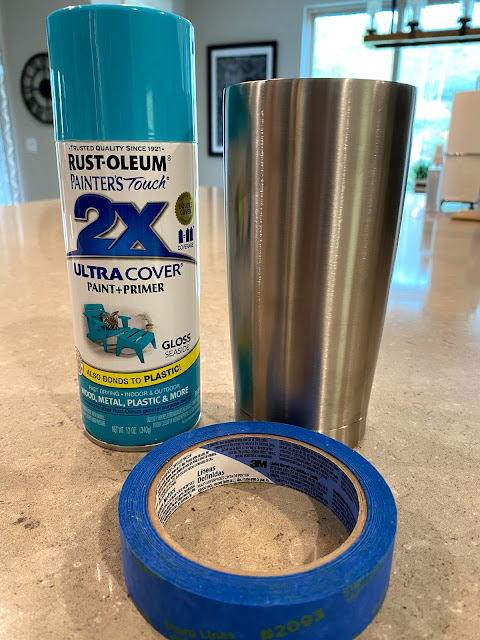 Before you paint the tumbler, use the painters tape to wrap around the entire top and bottom of the cup. 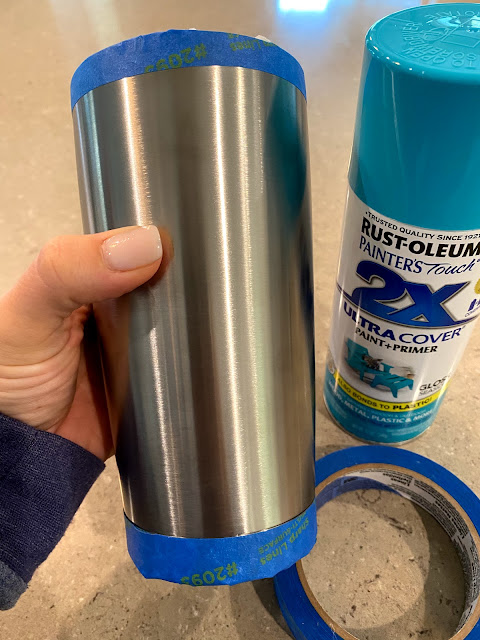 When working on the top of the cup, put the tape so it's half on the lip then fold it down onto the inside to protect that area.  Make sure the tape is sealed down well and there are not wrinkles or spots where paint could potential bleed under the tape. 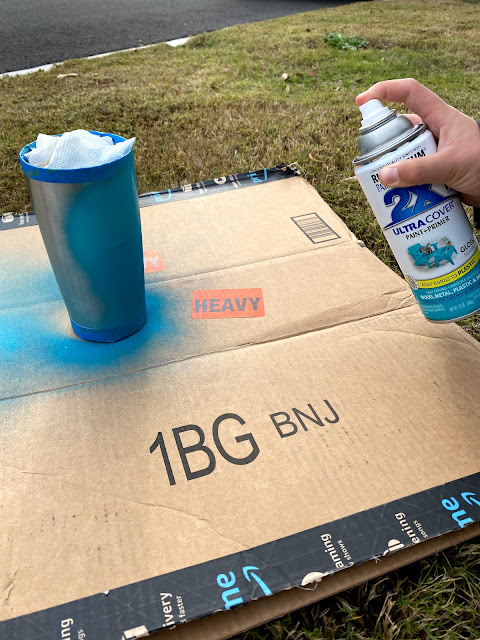 I stuffed my cup with paper towels so paint did not get inside the cup while painting. 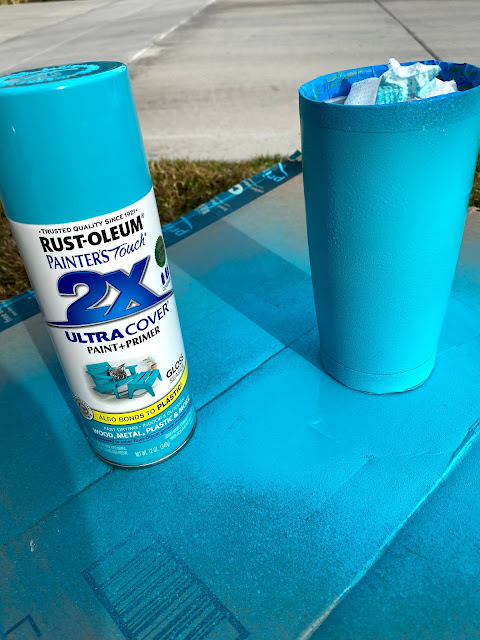 Now to spray paint a tumbler you need to use a light hand or you will end up with drips and uneven paint. I had an 11 year old helper and ended up with a big drip BUT fortunately after a coat of glitter and two coats of epoxy, I can't even tell where the trip is. So don't worry if you get a drip.


If you really want ensure you spray paint the tumbler without drips you can place it on some type of extension pole apparatus and rotate the end of the pole/turner by hand while you spray paint with the other hand.

Let the spray paint dry really well before you move on.

Do not remove the tape...which I did not realize was a terrible idea til the next step...


How to Add Glitter to a Tumbler

There are several ways to add glitter to a custom tumbler - I went with the Mod Podge method.  You can also use a thin layer of epoxy which I'm sure would give you a much more even glitter layer.

Regardless of which you go with it's easiest to add the glitter when the tumbler is on a spinner (and when you have tape protecting the top and bottom of the tumbler) so it's horizontal when you are pouring on the glitter.


For the Mod Podge method I did not have the spinner in motion while we worked, but we did rotate it manually as we worked our way around the tumbler.


Grab a piece of printer paper and crease it down the middle. Place the paper below the spinner to catch the glitter. The crease will make it easy to dump the excess back into the glitter jar.

You need to work pretty quickly to make sure the Mod Podge does not start drying or it will be difficult to get the glitter to stick.

Use one of the silicone brushes to apply (what should be) a thick, even layer of Mod Podge all over the tumbler.  Pour on the glitter in sections making sure to cover the entire surface of the cup as you manually rotate it.  Try to make the glitter layer as even as possible.  The best glitter for tumblers is a high quality glitter that is colored through rather than just on the surface. This is so when you sand your tumbler in a few steps the glitter retains its shine even when sanded.

If your glitter tumbler looks like mine (he tried) when you're done, don't worry you can add more Mod Podge and glitter in a second round.

Let the glitter and mod podge layer dry for several hours or even overnight.

Now you'll want to seal the glitter layer with Krylon Clear Coat Spray. I used two coats and kind of brushed off any uneven large areas of glitter. This just helps keep all the glitter stay sealed down enough so when you add epoxy in the next step you're not brushing glitter all over the place.

Wait several hours for the cup to dry really well before moving on to epoxy.


Re-Tape the Tumbler to Seal in Glitter

Remove the tape around the top and bottom of the cup and replace it with new strips of painters tape on both the top and bottom. This second set of tape should be placed so there's a SLIGHT area of stainless steel showing between the glitter and the tape. That small area, in addition to the rest of the cup NOT covered by tape, will be covered in epoxy. Applying the epoxy slightly above (on the top) and below (on the bottom) the glittered area will seal in the glitter completely.


Setting Up the Epoxy Tumbler Turner

Applying the epoxy is the most intimidating part of making glitter tumblers with epoxy. It's why I bought all the supplies about nine months ago and finally got up the nerve to make my first tumbler.
Before you start mixing and applying the epoxy, set up your work area in an spot where you have some room to work and where you are close to an outlet.  The epoxy tumbler turner will need to be plugged in and on for 6-8 hours at a time. I used the WRMK Spin It.  (It worked fine for me - but I don't have anything to compare it to as it's my first cup turner. There are definitely a lot of tumbler turners on Amazon if you are looking for something different.)

With the Spin It turner you can adjust the dimension of the ____ to make sure various size tumblers spin evenly. A tumbler that spins at an angle, off center, or not completely horizontally can result in epoxy drips or uneven application.
Grab a paper plate and place that below the cup turner to catch any epoxy drips.

How to Mix and Apply Epoxy to a Glitter Tumbler

If you're wondering what kind of epoxy to use on tumblers, which is a common question from beginners - I used Amazing Clear Cast brand epoxy. It comes with both epoxy part that you will need to mix together.  You can also get it as part of a full epoxy tumbler kit
Be sure to wear gloves and work in a well ventilated area.  For my 20oz tumbler, I used 10ml of epoxy for each of the epoxy layers.  Pour 5ml of A side in one of the measuring cups and 5ml of B side in the other. 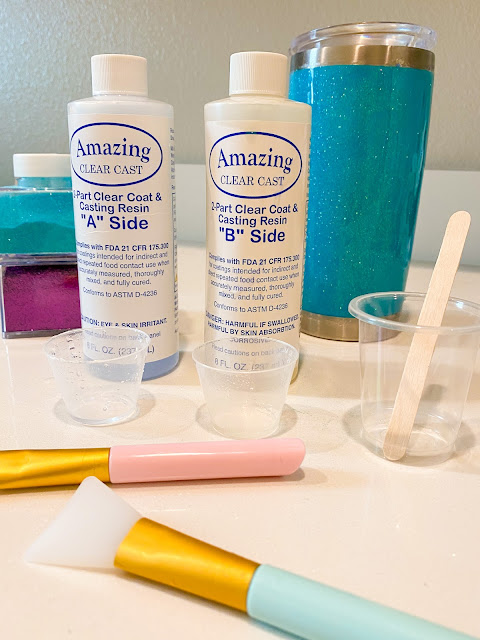 Pour the thicker (Part A) of the two into the small empty mixing cup. Use the popsicle stick to scrape the sides so you get as much as possible into the other cup.

Now pour the other 5ml part (Part B), which is thinner and easier to pour, SLOWLY into the thicker part. Use the popsicle stick to stir the two parts together. Stir slowly so you avoid bubbles. Keep stirring until the epoxy is no longer cloud, but clear.
Turn on your cup spinner so it's spinning pretty slowly and begin pouring the epoxy on the cup. Use your other hand or one of the silicone brushes to smooth the epoxy across the entire length of the cup.
(Note: You should have tape on your cup at this point. I did not have enough hands to take pictures at the same time so these pictures were taken after the tape was taken off.)


Continue to pour on epoxy and smooth it across the cup as the cup rotates until all the epoxy is on the cup and the cup is completely covered.
Once all epoxy is on the cup keep the cup spinning. Wait about 5-10 minutes and carefully (and with gloves still on) remove the tape from both the top and bottom. If you leave the tape on you'll end up sealing it under the epoxy layer.
Let the tumbler turner spin the cup slowly for 6-8 hours.

Sanding and Adding Vinyl to a Glitter Epoxy Tumbler

When the tumbler is finished spinning, the epoxy will likely still be somewhat sticky.  You can take it off the tumbler turner and let it dry for several more hours until it's no longer sticky.

Use 180-220 grit sandpaper to sand down he glitter tumbler. This part seemed super scary to me. All the sudden my nice shiny glitter tumbler was looking all scratched up and dull.  I sanded enough that it was relatively smooth. 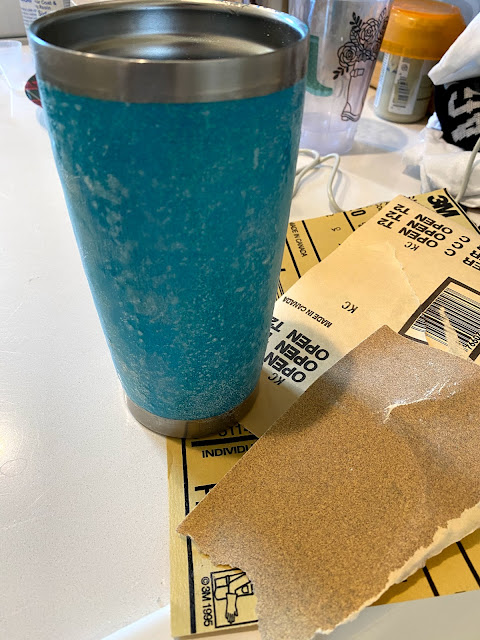 Use alcohol on a cotton ball or towel to wipe down the tumbler really well.

Now you need to add a second and final layer of epoxy. Repeat all the same steps from tapping the edges to mixing the two parts of epoxy to spinning the tumbler for another 6-8 hours.  This is how you'll seal the vinyl on the tumbler

The epoxy tumbler should be now be smooth and glittery.  Do not sand the tumbler this time!

It's certainly not perfect..but for my first go at it - I'm happy with how it came out!

Remember glitter tumblers with vinyl are not dishwasher safe and must be washed by hand.

Back to blog
★ Judge.me Reviews

Let customers speak for us